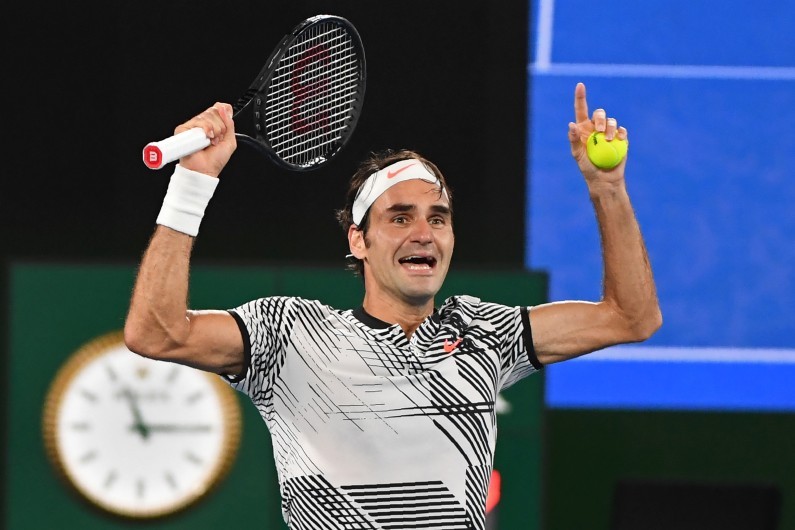 Only real tennis fans will understand what this blog post is about. Although fans of other sports might draw parallels with other comeback fairy tales. So I don’t need to say, though I will because it’s a thrill even to write it, Roger Federer just beat Rafa Nadal in five seesaw sets to win the 2017 Australian Open 14 years after his first Grand Slam win at Wimbledon.

This is remarkable in so many ways. First, it’s about both of them, not just the victor of this match. Should anyone have bet good money on these two being the contestants, they could probably now buy themselves a yacht from which to wave at the many players who live in Monte Carlo.

Federer is 35. He’s barely hit a ball for six months, following knee surgery after an injury sustained while running bath for his daughters. But for several years now many had already been writing him off. The stamina, confidence and perfection seemed to all be dented. Even though his body remained remarkably injury-free, his soul seemed not to quite believe and his energy not to quite outlast other serious contenders. We all thought how we’d miss him when he, surely before long now, retired to one or several of his luxury homes with his wife and against-the-odds two sets of twins.

Nadal is younger at 30. But, at least until this weird start to this tennis year, even 30 would have been considered an age where you were pretty lucky to still be near the top. And, unlike Federer, there’s rarely been a run of months where Nadal has not been nursing a strained body part – no surprise given his brutal approach to combat.

If Federer is the ballet dancer whose eternal grace seemed threatened only by anno Domini, Nadal is the boxer who somehow had the belief knocked out of him somewhere along the way – perhaps the sadder of the two processes to witness.

This contrast of styles and human stories – as well as the breathtaking talent of both – is why I think most fans so much wanted this ‘dream final’. The mouthwatering combination of the pure theatre we knew we’d experience and the utter unlikeliness that this event would ever take place. And, surely now, the impossiblity of it ever happening again.

For me, as no doubt for many others, it also took me back to where I was when I watched another classic duel between them. As my father lay in his nursing home bed in the summer of 2008, with the sun fading over the fruit trees outside his window, I sat with him watching Nadal prevail in five thrilling sets. My father was Spanish. He was also a huge tennis fan and for many years a commentator at Wimbledon for the BBC World Service.

When Rafa won, I leapt in the air and said “Dad, Dad, a Spaniard has won Wimbledon again!” (the first since Santana in 1966). It was a moment I felt sure would thrill him and one I so desperately wanted to share with him. But he looked blankly at me and managed a weak smile. I think he’d probably slept through much of the match and I’d barely noticed. It was a bitter sweet moment. We both knew he wouldn’t see another Wimbledon.

So I think today was also about ageing. About capturing something of the past and finding comfort that it could be returned to – even if fleetingly.

For a split second, the two white tables brought on for the trophy ceremony appeared like two stretchers ready to carry away the memory of these two great champions for ever. It was a pleasure to see Federer shed tears again, as he had done so memorably after his first Wimbledon win. And to see his expression as he held the trophy high, as if he thought he’d never again feel the weight of it in his arms. All great sporting moments are about human beings. But this will be a hard one to follow.

I am left-handed. A southpaw. Nothing extraordinary about that. Like many, I am a little bit proud to be in the minority (10 or 12 per cent of the population, depending on the stats you read – and again a little bit special because most lefties are men, including Obama, Einstein and Bowie). I also like to believe all the stuff about our being a bit more creative and better at tennis, while ignoring the news that we suffer from more behavioural problems and have a shorter life expectancy.

But recently I’ve noticed an odd preference of mine, and wonder if other left-handers share this? My preference is for being on the right-hand side of things. And I don’t mean politically. I mean being physically on the right.

For example, during a poetry weekend with the great Don Paterson, he sat at one end of the room and, as we all filed in, we could sit at any of a series of desks in a U formation. I immediately chose a desk that meant I was looking towards Don to my right. Later that day, the person next to me spotted the strangest thing: that everyone down our side of the room was left-handed, while those opposite were not. Perhaps an odd coincidence, but I filed away the observation.

I’m not crazy about flying, and in the last few months I’ve noticed I always choose a seat to the right of the aisle. I’d never given this any importance, and I’m not at all superstitious. Last time I flew, for some reason I had to swap with someone on the other side of the aisle. It felt really odd and, I’ll admit, I felt ‘less safe’ on the left – somehow more exposed and vulnerable. Knowing this to be illogical, I gritted it out – but I didn’t like it.

But perhaps most alarming of all is that when driving I’ve become aware that I like to sit in the fast lane for as long as possible. This is not because I fancy myself as Nico Rosberg or Lewis Hamilton. And my battered old Polo can’t comfortably go above 70mph for long. I just like the feeling of ‘the edge’ to my right rather than to my left. And I now prefer driving in Spain (even though I have vastly more experience in the UK), so that I can feel good in the slow lane – with the plains of Seville close by at my right elbow.

Am I alone among lefties in this longing for the right?

Oh joy. It is less than 48 hours until the London launch of Through An Artist’s Eye. This is an event that requires my voice – to read poems I have specially written to a sell-out audience in a fascinating venue: the Marx Memorial Library in Clerkenwell. And I have a horrible tickly cough. So either Murphy or Sod has a lot to answer for.

The poems in question are my part of a collaborative project with artist Sonia Boué. It is our tribute to the extraordinary Felicia Browne, an artist born in 1904 – who became the only British woman to volunteer with the Republican militia in the Spanish Civil War. She was killed almost instantly on her first mission, aged 32. So I’d like to do her justice and not have a choking fit in the middle.

Turning desperately to the web for fast-acting remedies, I find a bizarre list of suggestions. These include buying a pot plant (such as an aloe vera or weeping fig – the latter is how I feel during one of these coughs); covering one nostril while gently blowing the other “into a tissue” – I’m glad they added that bit; or “oil pulling”. This is not something I have come across before but apparently involves swishing an oil of one’s choice (olive please) around the mouth for one minute – or, intriguingly, 15-20 minutes. I thought I might manage something in between but not sure that’s valid.

Finally I Googled ‘dealing with coughing fit during presentation’ and was excited to see a site come up. It told me “should the level of coughing suddenly increase during your presentation” (yes, yes, I read on) “this is a signal from the audience that their patience is wearing thin”. Oh dear, I hope it won’t come to that.

So I will be armed with a Thermos of olive oil, a packet of Strepsils and a big knot in my soggy hanky.

Links to my work

A visual journey through the Financial Year 2019-20. A photo a day of the natural world.

Through An Artist’s Eye: Felicia Browne and the Spanish Civil War. Art by Sonia Boué. Poetry by Jenny Rivarola. (2016)

Sonia Boué’s blog about our collaboration